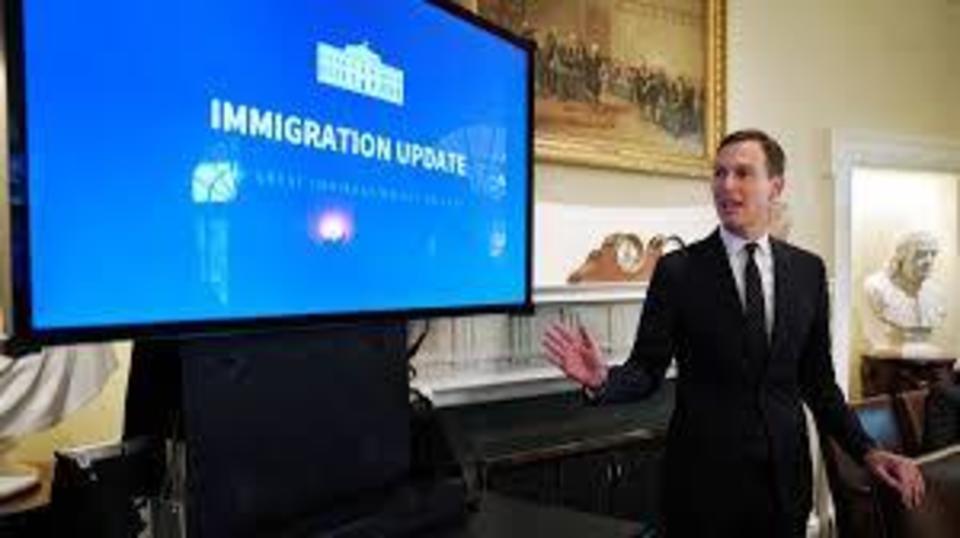 Kushner tells GOP it needs to unify behind immigration plan

Andy-MyImmiTracker
Senior White House adviser Jared Kushner told Senate Republicans Wednesday that the party should unite behind a 600-page immigration plan he crafted ahead of the 2020 election so the party can provide a positive vision for reform.

Senior White House adviser Jared Kushner told Senate Republicans Wednesday that the party should unite behind a 600-page immigration plan he crafted ahead of the 2020 election so the party can provide a positive vision for reform.

Sen. John Cornyn (R-Texas), an adviser to Senate Majority Leader Mitch McConnell (R-Ky.) said Kushner’s bill would be good for the party because it would define Republicans as the party of legal immigration and draw a contrast with Democrats as the “party of illegal immigration,” according to a person in the room.

Kushner’s main message was that it would be smart for the party to unify behind a plan to counter Democratic attacks that Republicans don’t have any interest in fixing the nation’s broken immigration system.

He told lawmakers “it’s important that Republicans be for something and not against something, and the president has worked hard to design this plan and we want to make sure we can all be unified as a party,” according to the source in the meeting.

He also provided an update on the border wall, telling lawmakers the administration expects to have between 400 and 500 miles built by the end of next year. He noted that the number of immigrants detained at the border has dropped and praised the management of acting Homeland Security Secretary Kevin McAleenan.

Kushner acknowledged that his legislation is a starting point but argued it’s important to begin building on a foundational bill concentrated on two areas where Republican lawmakers can largely agree: strengthening border security and shifting the nation to more of a merit-based immigration system.

His bill does not address more controversial topics such as what to do about immigrants who came to the U.S. illegally at a young age, known as "Dreamers," or E-Verify, a program that enables employers to check on the immigration status of workers.

Kushner described his proposals to beef up border security and reform legal immigration as “smart ideas” and predicted if Republicans can unite themselves they will at a minimum be able to win the policy argument ahead of the 2020 election, if not get a bill passed before 2021.

He said that he has already worked extensively to address GOP concerns, and has specifically addressed 11 issues brought to his attention.

Senate Republicans said the reaction to Kushner's bill, which had been presented in outline form in May, was generally positive, although a few lawmakers raised concerns about missing elements.

Sen. Rob Portman (R-Ohio), for example, called for it to include E-Verify, which he sees as the most effective way to combat illegal immigration, according to a person familiar with the meeting.

Other lawmakers said they are happy to start small and build up from there.

The bill had already been circulated to GOP Senate offices over the past two months. It focuses on two areas of immigration reform: strengthening border security and reforming the nation’s legal immigration system.

“I didn’t hear any negatives. You heard certain suggestions. Nobody is going to agree on everything,” he said, though he acknowledged that Kushner’s plan will have to be expanded.

“People do recognize that in order to pass something you’re going to have to eventually be discussing and add different elements, but I’d much rather do one step at a time and concentrate on something we hopefully can agree on,” Johnson added.

Senate Republican Steering Committee Chairman Mike Lee (R-Utah), who hosted the lunch and introduced Kushner, told colleagues that he had read the bill thoroughly and fully supports it.

“It’s important for us to talk about what we’re for when it comes to immigration,” Lee told The Hill after the meeting.

Johnson, the Homeland Security panel chairman, said Kushner’s bill would “restore a lot of sanity to the border,” according to sources in the room.

Sens. Roy Blunt (R-Mo.) and Dan Sullivan (R-Alaska) also made complimentary remarks about Kushner and his work, according to a person in the room.

“The thing they’re doing that’s really constructive is they’re reaching out to all the senators to get their ideas and thoughts and comments and questions,” Sullivan later told The Hill.

A Republican senator who requested anonymity to discuss the meeting described the reaction to Kushner as “positive.”

Yet the lawmaker said there are some major issues not addressed in the bill.

“It doesn’t deal with the fundamental issue of the people who are here. So it doesn’t deal with DACA,” he said, referring to the Deferred Action for Childhood Arrivals program, which protected Dreamers from deportation and which Trump moved to end in 2017.

The lawmaker said the discussion focused on “the border” and “merit-based” immigration.

“So it doesn’t deal with broad, comprehensive immigration,” the senator said.

Sen. Mike Braun (R-Ind.) said there was no pushback to Kushner’s plan in the room.

"No, other than it can't neglect some of the other issues, especially the ones where the Democrats are going to focus on,” Braun said.

Braun said Kushner told GOP senators that he wants to focus on areas of consensus within the Republican Party at the start of the debate.

"He said they're not going to disregard those, but they just want to focus on this because this ought to be something we all can agree to," Braun said.

Asked if he supports the bill, Braun said: "I don't know the details. I'm definitely supportive of the idea of increasing legal immigration."